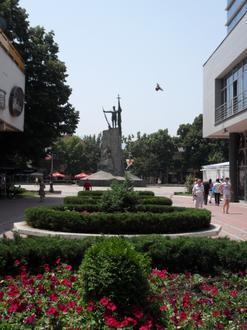 Kraljevo (Serbian: Краљево / Kraljevo; [krǎːʎɛʋɔ]) is a city in Serbia, built beside the river Ibar, 7 kilometres (4 miles) west of its confluence with the Western Morava. It is located in the midst of an upland valley, between the mountains of Kotle..  ︎  Kraljevo Wikipedia Page